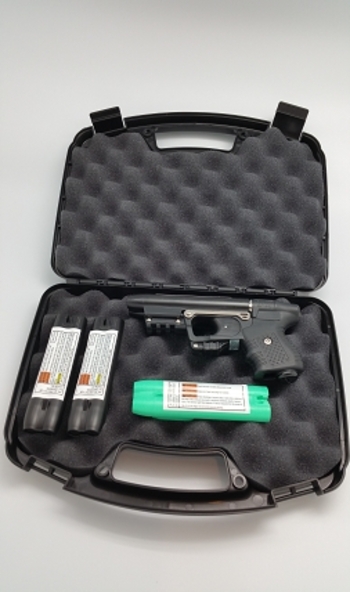 The FIRESTORM JPX 2 LE Pepper Spray Gun has a patented propulsion system launches a high grade Oleoresin Capsicum pepper resin solution faster than a any pepper spray and up to half the speed of a bullet at 590 fps. OC oleoresion capsicum irritant agent and its effects in conjunction with Jet Protector Technology Oleoresin Capsicum (OC) is an extract of the cayenne pepper plant. OC is the most effective inflammatory agent available today, and is successfully used by law enforcement professionals around the world.

OC has proven superior to both CS and CN tear gas when used against assailants under the influence of drugs or alcohol, as well as against psychotics. The inflammatory agent fired from the Jet Protector products is immediately effective upon contact with the face of an aggressor. The high velocity of the liquid jet as well as the inflammatory effects of the OC agent instantly interrupt forward movement.

The OC works rapidly as an inflammatory agent to the eyes, mucous membranes and respiratory system. The result is temporary blindness, coughing and nausea with extreme discomfort. The eyes of the aggressor immediately shut, and the high velocity of the jet ensures that the agent will penetrate behind eye glasses, through cloth masks and other masks with eye openings. This temporary blindness leads to instant incapacitation and lasts for about 45-60 minutes. Symptoms will disappear, usually with no after-effects.

The FIRESTORM JPX 2 LE Pepper Spray Gun uses a replaceable magazine with two chambers of extremely hot pepper resin, and quickly snaps on the frame. The power of each payload combined with reloading makes the JPX 2 LE Pepper Spray Gun extremely effective for interventions. The Jet Protector technology is a unique approach to enhance the performance of normal pepper sprays. The liquid OC irritant agent will be delivered much faster than aerosol, making it more reliable up to an extended range by means of a pyrotechnic power drive or primer. The pyrotechnic power drive is ignited by a mechanical firing pin acting upon a moveable piston, which causes the liquid agent to high pressure. The liquid agent is then forced through the nozzle, and emitted as a cone-shaped or aligned jet into the air at 590 FPS from the nozzel.

To launch an irritant agent by means of a pyrotechnic charge is a novel concept in non-lethal weaponry. In comparison to the pressurized canister of the standard pepper spray can, this new technological approach has the following advantages: It is NOT a pressurized system, and it has NO retained pressure in the inactive condition. There is NO loss of pressure throughout its shelf lifeThere are NO failures in operation due to loss of pressure Launches hot pepper spray up to 23 feet at 590 FPS from the nozzel.

There is NO variation of pressure even at the extreme operating temperaturesJet delivery minimizes cross-contamination. Suitable for indoor use. Jet delivery minimizes deflection through side or head wind. Superior performance in terms of velocity and range of the liquid irritant jetCan be fired in every position and orientation (sprays only work effectively in the vertical position). Can be kept in a hot or cold vehicle without pressure issues. If you have multiple attackers, then you can fire the JPX at longer than 23 feet and it will instantly mist multiple assailants all at once making them think twice about attacking you. The spray spreads as it goes further turning it into a cone or fog pattern, forcing the attacker to breath a cloud of pepper spray, stopping them in their tracks.

This also works great for dog attacks, or other animals you find in your areas. In the inactive position the liquid agent is held in the cartridge by a nozzle seal which will break once a pre-defined nominal pressure is reached. Having expelled the liquid agent through the nozzle the piston is retained within the cartridge case.If you are looking for an easy to use, non-lethal self defense product, the JPX 2 LE Pepper Spray Gun is your new best friend. Pull of the conventional double action only trigger is smooth with a pronounced release point, and the trigger automatically resets to fire the other charge.

The FIRESTORM JPX 2 LE is available in Orange, or black frames with an integral laser sight. The JPX is a waterproof, shockproof, police grade, bad ass pepper spray gun. How it the FIRESTORM 2 LE DIFFERENT FROM PEPPER SPRAY?Instantly incapacitates an assailant up to 23 feet.Revolutionary non-aerosol propulsion.Jet delivery at 590 FPS stops cross-contamination.Each magazine contains two separate powerful blasts. Reloading is both easy and fast.Magazines have an average life of 4 years. Some of the benefits:Limits liability associated with discharging a firearm / shooting an attacker or burglar.

Looks and works like a gun Can carry in places you can't carry a gun. Not considered a firearm by ATF Holds two shots (included) of exceptionally potent liquid will disable an attacker at least 45 minutes Superior to tear gas even when used against attackers under the influence of drugs Quickly reloadable (refills available) Light enough to carry easily (about 12 oz) 23' range. . . you don't need to be close to your attacker Accurate using the sites as opposed to trying to spray someone with a little canister Police grade, serious solution at 400,000 Scoville Heat Units, Less affected by wind. No blow-back like with conventional spray.

Not susceptible to heat or cold. Doesn't need to be shaken like an aerosol Waterproof Shockproof No batteries to charge Can be fired in a wet environment without issueNo accidental misfires due to early electronic discharge. Extremely effective for animal control. Measures: 7.28" L x 1.38" W x 3.46" H for easy carry or concealment. Practice cartridges that fire water and dye available for the JPXFOR LAW ENFORCEMENT: Most Law Enforcement operations with a firearm occur within 15 ft (5 meters). JET PROTECTOR technology has the following advantages when comparing it with lethal use of force using a conventional firearm: Dedicated to Non-lethality.

Actual firing distance is 23 feet with a 2 foot spreadBuilt-in Integral Red Laser for easy aiming. Cartridges fired with primers for reliability. Both Shockproof and Waterproof. No solid parts or fragments being expelled through the nozzle. Liquid Only Jet delivery minimizes risk of injury. Immediate stopping power due to accurate and massive coverage with liquid inflammatory agent. Works well on suspects on drugs or who are violent. 2 separate shots for better perpetrator control. Ideal for cell extraction or prisoner transferPerfect for animal control situations.

Watch the Video Below, then You Decide How Safe You Are!
(May take a Few Seconds to Load)